ADVANCE will provide maritime connectivity throughout the voyage around the world

For such a vast and essential resource, our oceans are under threat. Eight million metric tons of plastic are dumped into the oceans each year. That’s about 17.6 billion pounds — or the equivalent of nearly 57,000 blue whales — every single year. By 2050, ocean plastic will outweigh all of the ocean’s fish. The Statsraad Lehmkuhl is set to challenge our views of ocean sustainability by promoting, educating, and researching the topic during a 20-month sea voyage around the world.

Ocean sustainability is a critical concept for the world to grasp. If we do not take care of our oceans and sea life, many lives, livelihoods, and futures are at stake. Oceans absorb about 30% of carbon dioxide produced by humans, buffering the impacts of global warming, and over three billion people depend on marine and coastal biodiversity for their livelihoods. Globally, the market value of marine and coastal resources and industries is estimated at $3 trillion per year or about 5% of global GDP. Without thriving, healthy oceans, humanity could be facing a detrimental future on nearly every front that we consider valuable and good.

The Statsraad Lehmkuhl will cover vast, remote oceanic expanses with no terrestrial infrastructure to support essential research connectivity. With multiple IoT sensors, critical communication devices, and research apparatus reliant on the internet, the ship needs a stable and effective connectivity solution to ensure the research’s effectiveness and the crew’s safety. Eutelsat partner Telenor Maritime has stepped up to the challenge as a main sponsor and provider of the vessel’s communication and connectivity capabilities.

Powering the future of connectivity at sea

Telenor Maritime is the leading global communications partner at sea. Through their systems more than 30 million people, onboard 500 vessels and offshore installations, remain connected in the most remote parts of the ocean. As the main sponsor and connectivity provider for the Statsraad Lehmkuhl’s historic journey, they faced the challenge of ensuring international connectivity while the vessel was in motion. 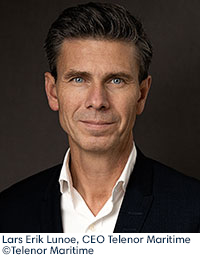 “The Statsraad Lehmkuhl needs to be constantly connected - while it’s at sea or docking into one of the 36 different ports around the world,” explained Lars Erik Lunoe, CEO of Telenor Maritime. “It’s a challenge that most connectivity solutions could not overcome.”

Due to the extremely remote nature of the voyage, hybrid connectivity was the only solution, combining many different backhaul sources into one powerful connectivity platform. But even the satellite connectivity itself posed a few problems. For one, traditional satellite connectivity would be unstable at sea, switching to different satellites as the ship continued moving. Additionally, the large amount of bandwidth required by the Statsraad Lehmkuhl’s sensors and research apparatus would demand a generous budget and dedicated support. Telenor Maritime found the solution to these challenges with Eutelsat ADVANCE Maritime.

ADVANCE Maritime, Eutelsat’s innovative new service, would provide much-needed connectivity without the traditional limitations of satellite connectivity at sea. Its revolutionary satellite-as-a-service approach, combined with highly effective VNO functionality, would offer the flexibility and performance needed for such a voyage. In addition, it would cover the ship’s routes in various oceans, docks, and extremely remote locations at sea.

“A good speed is needed to upload video taken onboard, scientists’ reports, on top of the usual sailing information and call/data exchange. The IoT sensors on the ship would also require stable, effective connectivity - all of which Eutelsat ADVANCE supplies,” said Lars Erik. “With ADVANCE, we can even adjust our bandwidth and performance requirements as needed, bringing unprecedented cost-efficiency to remote satellite communications.”

The maritime industry often deals with large data requirements for consumer consumption in the most unforgiving and remote conditions. Vessels like the Statsraad Lehmkuhl are often poorly equipped to provide reliable voice and data solutions for crew and researchers alike. Eutelsat’s ADVANCE Maritime solves this challenge by providing powerful, extensive coverage for maritime services worldwide, even in traditionally hard to reach areas such as Ushuaia, Polynesia and Cape Horn. It offers total flexibility on industrial bandwidth requirements while providing guaranteed performance and customised service and SLAs for VIP vessels.

Telenor Maritime has adapted the solution to the specific needs of the Statsraad Lehmkuhl. Maritime antennas are usually installed above the navigating bridge of modern ships, at the highest accessible point to avoid interference, but this is not possible on a traditional sailing ship. They used a dual antenna system, installed on both sides of the ship, to ensure Eutelsat’s satellites are always in line-of-sight. Leveraging ST Engineering’s Newtec Dialog platform and powerful MDM3310 modem, which supports both maritime and multicast services, the solution enables critical maritime connectivity to the crew and participants. 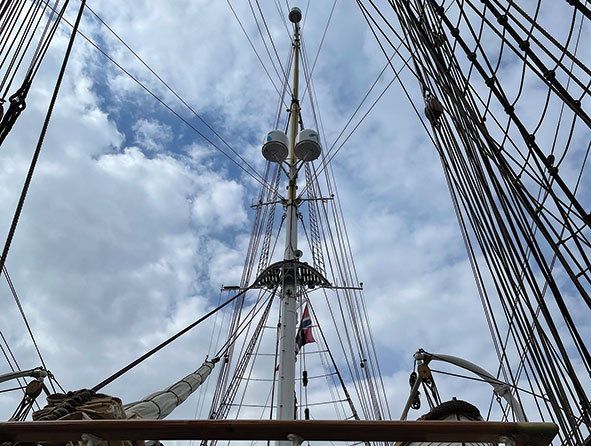 Connecting to the minds of the future

It is hoped that the Statsraad Lehmkuhl will raise awareness and action on behalf of people and future generations worldwide for ocean sustainability. While it is primarily a United Nations initiative, the whole event is also an initiative of the Norwegian State. Leading national technology Group Kongsberg is also a sponsor, with the national TV NRK broadcasting daily to Norwegian households with video footage and content on sea experiments, wildlife tracking, and more.

“We at Telenor Maritime are extremely proud to be a part of this initiative. None of this could be possible on such a scale without our connectivity services and Eutelsat ADVANCE Maritime,” concludes Lars Erik.

Eutelsat is currently working with Telenor Maritime to assess where further exposure for the initiative can take place. Some of the harbours where the ship docks can be a conference hosting location to further extend the reach and impact of the mission. The ship will be in Miami from December 10th to 18th this year, next year from February 23rd to 26th in Rio de Janeiro, and in Singapore during  November 2022. The final destination in April 2023 will be Bergen, Norway, the home base of the Statsraad Lehmkuhl. Everyone can follow the expedition and the ship’s route at https://oneoceanexpedition.com/.

If you would like to find out more about ADVANCE and the difference it can make for your business, contact Eutelsat today and discover the true definition of connectivity without limits.