Evolving with your audience

EVOLVING
WITH YOUR AUDIENCE

When Tricolor TV set up in 2005, it had a huge business challenge: how to reach households across the vast territory of Western Russia with an innovative and inexpensive TV offering in a country where many households were still receiving analogue TV and DTT was slow to take off.

The natural choice for Tricolor TV was to use the power of satellite to provide an affordable service to this exciting marketplace. For such large territories, where terrestrial networks’ performance decreases in peripheral, scarcely populated areas, satellite guarantees the same quality of broadcasting everywhere within the coverage zone.

Tricolor TV turned to Eutelsat to help it launch and build services. We gave them the strategically vital orbital position of 36° East to serve the country’s most densely populated region, before leasing further capacity on RSCC satellites at 56° East and 140° East to extend the company’s service right across the Russian Federation to the Pacific coast.

With a current subscriber base of over 12 million household,  Tricolor TV is Russia’s leading satellite television operator and the fifth largest pay-TV operator in the world (IHS Markit, 2017). It offers a full range of services including affordable satellite TV with a high number of HD, the largest offer of UHD channels in Russia, high-speed satellite internet and mobile TV. At Eutelsat, we are proud to have accompanied this customer on each step of its journey towards success.

With a large consumer base and premium capacity on our Eutelsat transponders, Tricolor TV was able to rapidly expand its service across the region, giving viewers the first real choice of channels they had ever had, as well as high quality broadcasting.

By leveraging satellite’s bandwidth capacity to deliver high quality broadcasting, Tricolor TV made HD TV a key part of its offer. The company has steadily upgraded its packages to include more HD channels and now over 9,9 million viewers subscribe to HD services (at first half-year 2018), including 100% of new connections.

With its ambition to constantly improve the customer experience, Tricolor TV has embraced Ultra HD and, again, satellite was the obvious choice for this format as it needs large amounts of bandwidth. To help with UHD, Eutelsat offered to Tricolor TV an experimental channel to test and fine tune before launching its commercial service. Using the new HEVC compression standard ensures that customers can enjoy breath-taking images.

Today’s consumers want to access TV anytime, anywhere and on any device – and at Eutelsat, we are adapting our services to meet this demand. To this end, we’ve worked with Tricolor TV to launch Territoria, allowing viewers in cafes, bars, airports, hairdressers and other connected venues to watch Tricolor TV channels on their smartphone or tablets using Eutelsat’s unique SmartBEAM technology.

The service operates from the EUTELSAT 36C satellite at 36° East, beaming encrypted content to a low-cost SmartBEAM receiver on the premises. This is then accessed by local users using high quality WiFi. Viewers simply have to install the free Smotri TV mobile app, available from the Apple Store or Google Play and can enjoy the choice of fifty television channels.

Eutelsat has not only supported growth in the video business, we have been instrumental in the launch and development of satellite broadband. In fact, Tricolor TV is using the Ka-band capacity of EUTELSAT 36C to offer genuine two-way connectivity to customers across Russia. Here, as in many countries, the digital divide caused by the limitations of terrestrial networks can be overcome by the comprehensive coverage and universal quality of service guaranteed by satellite.

The higher frequencies of the Ka-band spot beams enable Tricolor TV to offer the service in areas of about 300 km, with individual download speeds up to 40Mbps and upload speeds of 5Mbps. Launched in 2016, the company had already captured 7% of the internet market in Russia by the end of 2017.

“There’s a longstanding partnership and successful cooperation between Tricolor TV and Eutelsat. Together, we have taken digital TV to new heights, with unique products such as Territoria Tricolor TV and two-way high-speed satellite internet.” 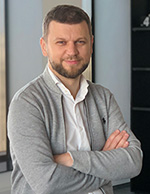