A guide to TV distribution models

What are TV Distribution models?

Over the years, TV distribution models have changed. Today, we have access to a multitude of ways of receiving entertainment and information from what we understand as television. However, with all these new distribution models, Satellite TV is far from dead - and is in fact growing!

How we receive TV

Many of us enjoy the benefits of television-based entertainment and information but have no idea of how or why it works. TV distribution itself can come in many different shapes and sizes, but there are three main types of delivery models: 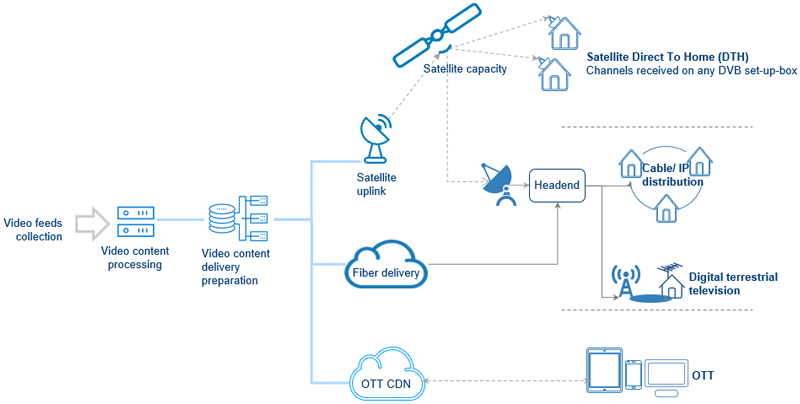 Let’s take a closer look at each one in more detail.

Strictly speaking, this is one of the more direct modes of distribution when we refer to ‘satellite TV’. Satellite Direct-to-Home achieves video delivery via radio waves received through a satellite dish, usually placed on top of your house.

Satellite Direct-to-Home enables broadcasters to directly beam their channels to the viewer’s TV set. This means that viewers have no need for a separate cable connection to access the TV channels.

The biggest advantage of satellite television for broadcasters is its unique reach. No matter how developed or undeveloped a country’s infrastructure is, broadcasters can reach all viewers in even the most remote areas, and offer a truly nationwide service.

Cost is another important element for broadcasters. While some infrastructure transmission costs increase based on the number of users, with satellite transmission, costs remain the same no matter how many viewers you reach. This investment could be considered a disadvantage initially, however, broadcasters gain immediate access to a large number of homes, making it an extremely efficient point-to-multipoint network option.

Another concern that potentially faces broadcasters is the maturity of DTH technology, yet DTH viewing is growing in every region and it can distribute any format, including 4k. In addition, the bandwidth availability of satellite enables broadcasters to deliver any number of channels in premium quality, compared to other distribution options which have a cap on the amount of channels that can be supported.

Among the advantages for DTH viewers are the superior quality of content, since the signal is not split through a cable, and there is no cable operator who curates and curbs channel choice. It can also work out more cost-effective for viewers who only want to receive free-to-air TV channels, as apart from the initial investment in hardware there are no recurring monthly costs.

The disadvantages for viewers largely depend on the region and prevailing business models. In some regions, viewers can access thousands of free TV channels with just a low-cost satellite dish and set-top box, and no monthly fees, while elsewhere, setting up the receiving apparatus can be more costly and require time and effort.

Three of the main types of terrestrial networks:

For broadcasters, the main limitations involve reach and content availability. Terrestrial networks rely heavily upon the infrastructure that is available in the country. This means that, more often than not, services cannot reach remote areas where the terrestrial infrastructure is simply not sufficient or too costly to be deployed. Utilising satellites to compliment the service is one way in which broadcasters can tackle this challenge and maximise their reach.

In addition to this, the cable or IP pipe can only support a limited number of channels, much lower than with satellite-based options.

For viewers in areas where cable, IP or terrestrial networks are deployed, access is easy and there is a reliable stream of content. However, this is not the case for everyone, especially in areas where the coverage does not extend to. Depending on where viewers are located, bandwidth availability and content can be restricted.

OTT is a term used to describe video delivery over the public internet. Essentially, this is provided via a high-speed internet connection rather than a cable or satellite provider - however, OTT does not mean free, as the term encompasses services such as Netflix, Amazon, iTunes and HBO Now.

OTT content can be accessed directly on a computer, but it is often watched on a web-enabled television or through an internet-enabled device, such as a Roku or Apple TV, connected to conventional television.

The primary advantages of OTT are its relatively cheap price point for viewers and its on-demand service. However, for broadcasters, the pay-per-user model inevitably reaches a tipping point the more successful they are with the platform, as CDN costs rise in line with audience growth. This is contrasted with satellite services, where costs don’t rise as viewer numbers increase. Therefore, OTT distribution becomes more expensive than satellite at a certain point.

In addition to the above, OTT offers no guarantees that broadcaster content will even be discovered by users in the first place. Competition is fierce, limited bandwidth availability affects content quality and latency causes time delays when broadcasting live events. Likewise, users need to have a good broadband connection to receive the broadcast - something that isn’t always widely available.

This challenge is reflected for broadcasters who want to use OTT distribution. The challenges of broadband availability require a strong network backbone that can ensure stable and reliable OTT viewing. Even developed countries like France have a significant percentage of the population who lack the connectivity speeds required to watch OTT content at home. OTT providers are increasingly investigating alternative options, like satellite, to increase their reach and streaming reliability.

The future of TV distribution

With the extensive media coverage of services such as Netflix, it would be expected that OTT would be undisputed as the future of TV distribution models. However, this is simply not the case. Satellite TV distribution is in fact rapidly growing, both in emerging markets such as Africa, South America and parts of Europe and in more mature markets such as the USA, UK and Australia.

Here are a few points to consider on the facts of satellite service today.

The satellite market has continued to maintain its share of over a quarter of the total market and is expected to increase its share by around 4% over the next three years .
Broadcasters continue to choose satellite distribution for its extensive reach and scaling capabilities. Unlike other forms of distribution, satellites can offer a multitude of channels and reach more audience members in a more cost-effective way than OTT. This fact was highlighted in our MENA webinar by Michael Cairns, COO of Rotana Media when he said, “As a broadcasting technology to reach a mass market in an economical way, satellite provides that possibility and will continue to do so. The build out of other networks to address 100% of the population won’t happen fast enough.”

Satellite is the preferred choice for Africa

Including 7 of the 10 world’s fastest growing economies, African homes are predominantly choosing satellite above other forms of distribution methods. This is due to the more remote nature of many households in Africa as well as the minimal infrastructure required to support quality local and international TV viewing. Satellite offer these channels visibility, stability and quality which other forms of distribution are unable to support.

OTT broadcasters are turning to satellite to extend their reach

OTT broadcasters are increasingly seeing satellite television as an opportunity rather than a threat. Satellite offers OTT broadcasters a new way to reach thousands of homes and expand their audience. In Germany, sports streaming service DAZN is looking to distribute its linear channels to Sky subscribers to reach more homes. According to Ampere Analysis Insights, this would enable DAZN to access an additional 1.9 million households and potentially generate up to €153 million in revenue. And in France, Netflix recently announced that they are testing their first linear channel to meet consumer demand for “traditional TV” in the country. In essence, OTT operators are starting to consider the benefits of hybrid networks to gain more reach and access all viewers across countries.

5G is unready - but will always rely on satellite

5G continues to remain expensive for broadcasters, and currently does not offer the coverage broadcasters are looking for. Despite this, satellites will always be needed to feed the 5G head-ends, and many consumers will simply not be able to afford 5G in its current form.

No matter how popular OTT becomes, satellite continues to grow in contrast to other distribution models such as cable. Broadcasters who wish to capitalise on emerging markets around the world could seize an opportunity to access viewers through satellite.

Partner with the best - reach the rest

Satellite distribution provides a unique opportunity for broadcasters to reach TV markets in a more effective and direct way than other models could offer. It can reach the furthest homes in the most remote areas and offer content from a wide variety of channels.

This is the primary reason that broadcasters will have to turn towards a hybrid approach. Bundling satellite and terrestrial distribution, future bandwidth requirements and coverage challenges can be overcome. This will enable broadcasters to maximise their content offering, increase their reach and boost their user experience.

If you would like to access this rapidly expanding market, consider Eutelsat. Eutelsat is the leading provider of satellite services in emerging markets around the world. Through a fleet of terrestrial and extra-terrestrial satellites, it enables you to reach more homes, more effectively.