StarTV, a high-quality, affordable service for millions of homes

No TV broadcasting model is the same across the globe. Each market has its own specificities. In the Americas, Direct-to-Home (DTH) delivers hundreds of TV channels to users' homes across vast territories. However, with a deregulated market there are no universal coverage obligations to ensure all citizens receive a service. And terrestrial television broadcasters have their own transmission towers, rather than using a shared ground network as is the case in Europe

Mexican entertainment service provider and owner of StarTV, StarGroup, initially had a pay-TV platform called TVZac. It was broadcast regionally across the state of Zacatecas via microwave, in the 2.5 GHz frequency band, and customers received the package through a terrestrial antenna. When the Mexican government released 4G licenses in the same frequency, prices increased significantly, so STARGROUP sold its frequency spectrum to several operators. But they didn’t want to stop broadcasting their TV platform. That’s when they met Eutelsat, in 2014, and transitioned from delivering microwaves to transmission towers on the ground, to delivering broadcast signals to satellites among the stars!

At that time, there were two American DTH platforms in the country - Sky Mexico and Dish Mexico - reaching several million subscribers, and with an average ARPU of 40-50 USD. With Mexico’s population of around 120 million people, that meant that less than 20% were willing to pay that price range for their TV reception.

StarTV wanted to target the rest of the Mexican population and create a package that the majority of households could afford. They faced the daunting challenge of launching a new DTH pay-TV platform with an attractive content offering, which had to include more than the 20 channels they previously had, and at an affordable price.

Eutelsat partnered with StarTV and guided them through the initial phase of their product development. To attract more new customers, Eutelsat encouraged STAR TV to partner with major American pay-TV networks, such as HBO and Disney. Additionally, they entered into agreements with TV Azteca and Televisa, the two largest content providers in Mexico, as well as with local distributors, and succeeded in bringing the total number of available channels to 50. All these agreements provided a competitive advantage to StarTV.

During that same period, StarTV concluded a multi-year agreement for transponders on the EUTELSAT 117 West A and 117 West B satellites which would enable them to instantly reach an established DTH audience at the region’s leading 117° West orbital location, and guarantee the quality of their broadcasting for years to come.

Under Eutelsat’s guidance, StarTV began a grassroots campaign, offering a simple SD quality channel package for just 7 USD/month. In addition to the low service cost, they minimized the equipment and installation costs for customers, and focused on building a robust network of installers from scratch, which they incrementally expanded across the entire country over time. STAR TV also partnered with Technicolor Mexicana and Tele System - two local companies with a lot of experience in working with MPEG4 and HD.

As StarTV grew in subscribers and available channels, they were faced with another challenge – with their channels only available in SD, and homes increasingly being equipped with high resolution TV screens, how could StarTV ensure a quality viewing experience for this new audience group? Following Eutelsat’s advice, they were able to upgrade their channel offer and propose an HD option. Their new HD package included the leading national channels from, TV Azteca, FOX Mexico, ESPN, and HBO. 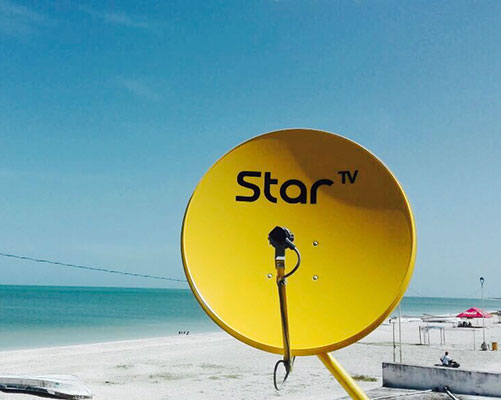 StarTV quickly reached 30 thousand subscribers in the state of Zacatecas, where it began, and gradually continued to expand across all of Mexico. When the Mexican government saw StarTV’s extensive coverage, particularly in rural areas, new channels with educational content for students were added, and in less than five-years, their audience had increased a massive eight-fold. In 2020, StarTV had 250 thousand subscribers and 80 TV channels.

With a constantly expanding installer network and new channels, StarTV is on the path to becoming one of the most successful TV providers in Mexico. "Eutelsat has enabled StarTv to deliver low-cost pay-TV services across Mexico, and more that a satellite provider, has been a partner with whom we have designed services that enrich our entertainment offer and improve our customer experience" declared Jose Aguirre, President and CEO of StarTV.

Their success has opened the doors for further evolutions to their services and enabled them to tackle other customer tiers. While the standard subscription price remains low and affordable, the company has begun to address higher-income audiences with a prime StarTV package that includes 100+ channels at 30 USD/month. This organic growth strategy has enabled StarTV to launch and deliver a quality and reliable TV broadcasting service with consistency across all of Mexico. Thanks to the excellent work of StarTV and Eutelsat’s commitment to helping them grow gradually and organically, StarTV has become a prominent TV provider with a diversified portfolio of offerings that targets all customer tiers.

If you would like to find out more about how satellite broadcasting can help your TV package grow, contact Eutelsat today. For more information on StarGroup visit their website: www.stargroup.com.mx.